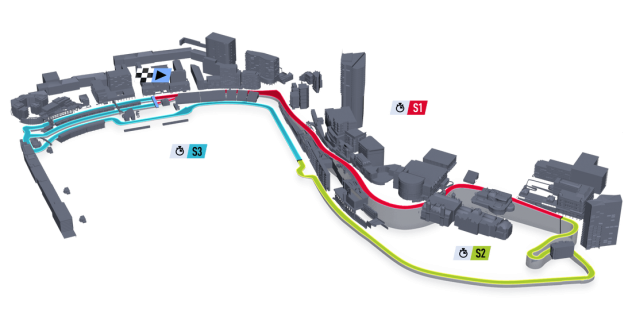 Circuit de Monaco is a street circuit laid out on the city streets of Monte Carlo and La Condamine around the harbour of the principalityof Monaco. It is commonly referred to as “Monte Carlo” because it is largely inside the Monte Carlo neighbourhood of Monaco.

The circuit is used on two weekends in the month of May of each year to host the Formula One Monaco Grand Prix and Formula EMonaco ePrix (odd years) or Historic Grand Prix of Monaco (even years). Formula One’s respective feeder series over the years – Formula Two, Formula 3000 and today the GP2 Series – also visit the circuit concurrently with Formula One.

The idea for a Grand Prix race around the streets of Monaco came from Antony Noghès, the president of the Monegasque motor club, Automobile Club de Monaco, and close friend of the ruling Grimaldi family. The inaugural race was held in 1929 and was won by William Grover-Williams in a Bugatti.

The building of the circuit takes six weeks, and the dismantling after the race another three weeks. The race circuit has many elevation shifts, tight corners and is narrow. These features make it perhaps the most demanding track in Formula One racing. Although the course has changed many times during its history, it is still considered the ultimate test of driving skills in Formula One. It contains both the slowest corner in Formula One (the Fairmont Hairpin, taken at just 48 km/h or 30 mph) and one of the quickest (the flat out kink in the tunnel, three turns beyond the hairpin, taken at 260 km/h or 160 mph).

Due to the tight and twisty nature of the circuit, it favours the skill of the drivers over the power of the cars. However, there is very little overtaking as the course is so narrow and dangerous. Nelson Piquet likened racing round the course to “riding a bicycle around your living room”. Prior to 1987, the number of cars starting the race was limited to 20, compared to 26 at other circuits. The famous tunnel section (running under the Fairmont Hotel, marked in grey in the circuit diagram above) is said to be difficult for drivers to cope with due to the quick switch from light to dark, then back to light again, at one of the fastest points of the course. As a result, race outcomes tend to be decided by grid positions as well as pit strategies, and is extremely hard on gearboxes and brakes.

Several attempts have been made to improve cramped conditions in the pit garages. In 2002, a substantial amount of land was reclaimed from the harbour to slightly change the shape of one section of the circuit; this left more space for new pit garages, which debuted in the 2004 event.

The circuit is generally recognised to be less safe than other circuits used for Formula One. Driver and former winner Michael Schumacher stated before the 2012 Grand Prix that the additional risk is “justifiable once a year”. If it were not already an existing Grand Prix, it would not be permitted to be added to the Formula One schedule, for safety reasons.

In January 2009, the circuit was voted top of the “Seven Sporting Wonders of the World” in a poll of 3,500 British sports fans. 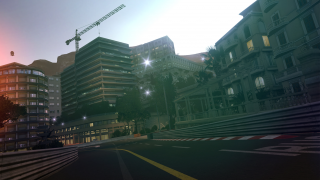