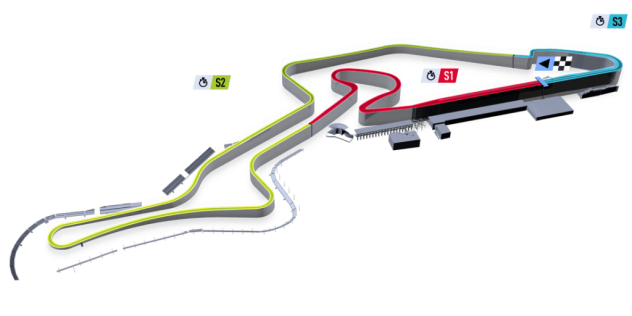 Nürburgring is a 150,000-capacity motorsports complex located in the town of Nürburg, Rhineland-Palatinate, Germany. It features a Grand Prix race track built in 1984, and a much longer old “North loop” track which was built in the 1920s around the village and medieval castle of Nürburg in the Eifel mountains. The north loop is 20.8 km (12.9 mi) long and has more than 300 metres (1,000 feet) of elevation change from its lowest to highest points.

Between 1982 and 1983 the start/finish area was demolished to create a new GP-Strecke, and this is used for all major and international racing events. However, the shortened Nordschleife is still in use for racing, testing and public access.

In the early 1920s, ADAC Eifelrennen races were held on public roads in the Eifel mountains. This was soon recognised as impractical and dangerous. The construction of a dedicated race track was proposed, following the examples of Italy’s Monza and Targa Florio courses, and Berlin’s AVUS, yet with a different character. The layout of the circuit in the mountains was similar to the Targa Florioevent, one of the most important motor races at that time. The original Nürburgring was to be a showcase for German automotive engineering and racing talent. Construction of the track, designed by the Eichler Architekturbüro from Ravensburg (led by architect Gustav Eichler), began in September 1925.

The track was completed in spring of 1927, and the ADAC Eifelrennen races were continued there. The first races to take place on 18 June 1927 showed motorcycles and sidecars. The first motorcycle race was won by Toni Ulmen on an English 350 cc Velocette. The cars followed a day later, and Rudolf Caracciola was the winner of the over 5000 cc class in a Mercedes Compressor. In addition, the track was opened to the public in the evenings and on weekends, as a one-way toll road. The whole track consisted of 174 bends (prior to 1971 changes), and averaged 8 to 9 metres (26 to 30 ft) in width.

In 1929 the full Nürburgring was used for the last time in major racing events, as future Grands Prix would be held only on the Nordschleife. Motorcycles and minor races primarily used the shorter and safer Südschleife.

After World War II, racing resumed in 1947 and in 1951, the Nordschleife of the Nürburgring again became the main venue for the German Grand Prix as part of the Formula One World Championship (with the exception of 1959, when it was held on the AVUS in Berlin).

By the late 1960s, the Nordschleife and many other tracks were becoming increasingly dangerous for the latest generation of F1 cars. In 1967, a chicane was added before the start/finish straight, called Hohenrain, in order to reduce speeds at the pit lane entry. This made the track 25 m (82 ft) longer.

In accordance with the demands of the F1 drivers the Nordschleife was reconstructed by taking out some bumps, smoothing out some sudden jumps (particularly at Brünnchen), and installing Armco safety barriers. The track was made straighter, following the race line, which reduced the number of corners. The German GP could be hosted at the Nürburgring again, and was for another six years from 1971 to 1976. The old Nürburgring never hosted another F1 race again, as the German Grand Prix was moved to the Hockenheimring for 1977. By its very nature, the Nordschleife was impossible to make safe in its old configuration. It soon became apparent that it would have to be completely overhauled if there was any prospect of Formula One returning there. With this in mind, in 1981 work began on a 4.5 km (2.8 mi)-long new circuit, which was built on and around the old pit area.

The new track was completed in 1984 and named GP-Strecke. Besides other major international events, the Nürburgring has seen the brief return of Formula One racing, as the 1984 European Grand Prixwas held at the track, followed by the 1985 German Grand Prix. As F1 did not stay, other events were the highlights at the new Nürburgring, including the 1000km Nürburgring, DTM, motorcycles, and newer types of events, like truck racing, vintage car racing at the AvD “Oldtimer Grand Prix”. 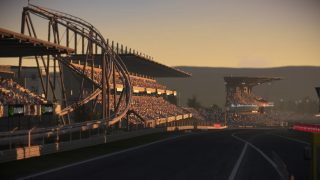