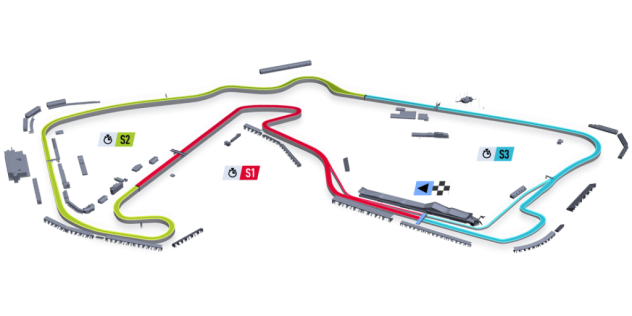 Silverstone is built on the site of a World War II Royal Air Force bomber station, RAF Silverstone, which opened in 1943. The airfield’s three runways, in classic WWII triangle format, lie within the outline of the present track.

Silverstone was first used for motorsport by an ad hoc group of friends who set up an impromptu race in September 1947. One of their members, Maurice Geoghegan, lived in nearby Silverstone village and was aware that the airfield was deserted. He and eleven other drivers raced over a two-mile circuit, during the course of which Geoghegan himself ran over a sheep that had wandered onto the airfield. The sheep was killed and the car written off, and in the aftermath of this event the informal race became known as the Mutton Grand Prix.

The next year the Royal Automobile Club took a lease on the airfield and set out a more formal racing circuit. Their first two races were held on the runways themselves, with long straights separated by tight hairpin corners, the track demarcated by hay bales. However, for the 1949 International Trophy meeting, it was decided to switch to the perimeter track. This arrangement was used for the 1950 and 1951 Grands Prix. In 1952 the start line was moved from the Farm Straight to the straight linking Woodcote and Copse corners, and this layout remained largely unaltered for the following 38 years. For the 1975 meeting a chicane was introduced to try to tame speeds through the mighty Woodcote Corner (although MotoGP would still use the circuit without the chicane up until 1986), and Bridge Corner was subtly rerouted in 1987.

The track underwent a major redesign between the 1990 and 1991 races, transforming the ultra-fast track (where in its last years every corner was taken in no lower than fourth or fifth gear, depending on the transmission of the car, except for the Bridge chicane, which was usually taken in second gear) into a more technical track. The reshaped track’s first F1 race was perhaps the most memorable of recent years, with Nigel Mansell coming home first in front of his home crowd. On his victory lap back to the pits Mansell even found time to pick up stranded rival Ayrton Senna and give him a lift on his side-pod after Senna’s McLaren had run out of fuel on the final lap of the race.

Following the deaths of Senna and fellow Grand Prix driver Roland Ratzenberger at Imola in 1994, many Grand Prix circuits were modified in order to reduce speed and increase driver safety. As a consequence of this the entry from Hangar Straight into Stowe Corner was modified in 1995 so as to make its entry less dangerous. In addition, the flat-out Abbey kink was modified to a chicane in just 19 days before the 1994 GP. Parts of the circuit, such as the starting grid, are 17 metres wide, complying with the latest safety guidelines. 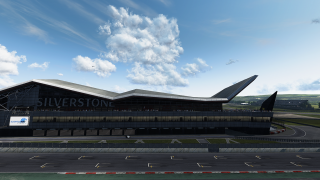