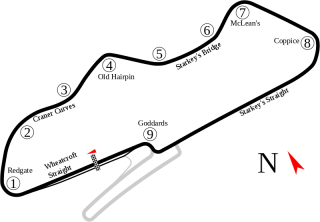 Originally part of the Donington Hall estate, it was created as a racing circuit during the period between the First and Second World Wars when the German Silver Arrows were battling for the European Championship. Used as a military vehicle storage depot during World War II, it fell into disrepair until bought by local construction entrepreneur Tom Wheatcroft. Revived under his ownership in the 1970s, it hosted a single Formula One race, but became the favoured home of the British round of the MotoGP motorcycling championship.

Donington Park motor racing circuit was the first permanent park circuit in England, which also ended the race circuit monopoly that Brooklands had held since 1907.

Fred Craner was a former motorcycle rider who had taken part in seven Isle of Man TT races and was by 1931 a Derby garage owner and secretary of the Derby & District Motor Club.

The original track was 2 mile 327 yd (3,518 m) in length, and based on normal width unsealed estate roads. The first car race was held on 25 March, followed by three car meetings further that year. The first Donington Park Trophy race was held on 7 October 1933, and the 20-lap invitation event was won by the Earl Howe in a Bugatti Type 51.

The circuit at Donington Park was closed in 1939 due to World War II, when it was requisitioned by the Ministry of Defence and was converted into a military vehicle depot.

In 1971 the circuit was bought by business man and car collector Tom Wheatcroft, who funded the rebuilding of the track. Wheatcroft moved his collection to the circuit, in a museum now known as the Donington Grand Prix Exhibition which opened in 1973, and has the largest collection of Grand Prix cars in the world.

The motor racing circuit re-opened for cars on 28 May 1977, as per the original pre-war opening, the first post-war meeting was for motorcycles. The first postwar car race meeting was organised by the Nottingham Sports Car Club, sponsored by local Lotus dealers, J A Else of Codnor. That first car meeting nearly didn’t happen, as the local ramblers tried to assert their rights to retain access to footpaths at the eleventh hour. The meeting went ahead as a “Motor Trial”, a legal loophole that curtailed the use of single seater racing cars for that opening meeting. The NSCC continued to run race meetings at Donington until the Donington Racing Club was formed and a licence to run race meetings obtained.

The Melbourne Loop was built in 1985 to increase the lap distance to 2.5 miles (4.02 km) and allow the track to host Grand Prix motorcycle races – at 1.957 miles (3.149 km) without the loop, the circuit was deemed too short. This shorter layout remains as the National circuit, which is used for most non-Grand Prix events.

In recent times Donington has held meetings of MotoGP, the British Touring Car Championship and British Superbike Championship, as well as the 1993 European Grand Prix.

Other events taking place at the track include a 1000 km endurance race for the Le Mans Series in 2006, the World Series by Renault and the Great and British Motorsport Festival. On 26 August 2007, the circuit hosted the British Motocross Grand Prix, with a purpose-built motocross circuit constructed on the infield of the road circuit. 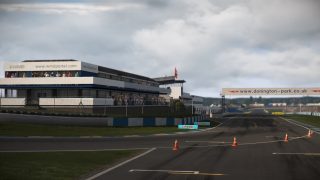